New research shows people across Southeast Asia are concerned that governments are not doing enough to address climate change. ASEAN should reinforce its institutional framework to mitigate the climate impacts.

The new State of Southeast Asia 2020 survey report released by Singapore's ISEAS-Yusof Ishak Institute shows that climate change is now among the top security concerns expressed by regional experts and opinion leaders. 66.8% of the 1,308 Southeast Asian experts surveyed for the report from across ASEAN are concerned about climate implications, up from 52.6% in 2019.

It isn't surprising to see a growing concern over climate threats in Southeast Asia. Over the past few decades, climate hazards have brought devastating impacts to the region. 52.7% of respondents in the State of Southeast Asia 2020 survey believe it is a severe and immediate threat to the well-being of their states. The view is heightened among survey participants from six ASEAN states: Indonesia, the Philippines, Vietnam, Laos, Cambodia and Thailand, where exposure to climate hazards such as flood, drought, and extreme weather is immense. 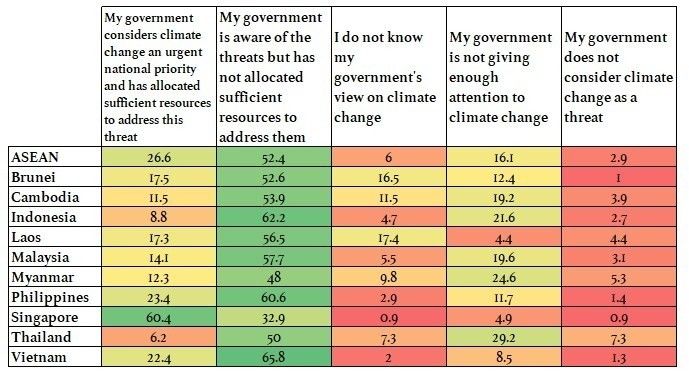 Without a commitment to environmental protection, the consequences could continue to worsen, and experts across ASEAN are concerned that their governments aren't doing enough to address the crisis. 52.2% of the survey participants say that their government is aware of climate threats but has not allocated sufficient resources to address them. In the fast-growing lower-middle-income countries such as Vietnam, Indonesia and the Philippines, this concern is more pronounced. Only in Singapore did the majority of survey participants say their government has put climate at the forefront of the national agenda and allocated sufficient resources to address it.

The region is seeing increasingly severe and more frequent climate change-fueled disasters. In 2008 in Myanmar, Cyclone Nargis caused 130,000 deaths and US$12.9 billion in damage, making it the deadliest and costliest cyclone ever in the Indian Ocean. A report from the United Nations Environment Programme indicates that Myanmar struggled to advance their economic development agenda after the disaster, as the cyclone brought damage to Ayeyarwady region and Yangon division.

Five years later, Typhoon Haiyan hit the Philippines and displaced more than 6 million people. The typhoon disrupted the Philippines' national development programs, including plans to provide housing and infrastructure for the poor, and deepened poverty.

As global temperatures rise, extreme climate disasters will happen more frequently, according to the Intergovernmental Panel on Climate Change (IPCC). Climate change can throw off development plans, especially for countries where resources and capacities are limited. The impacts may undermine ASEAN member states' vision to realise a stronger and more prosperous region. 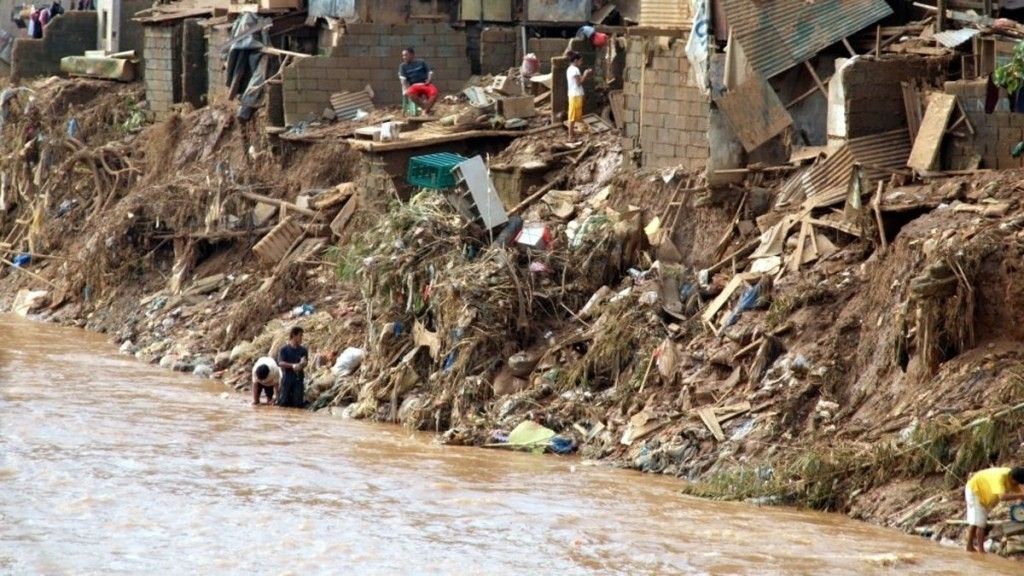 Flooding in Manila, the Philippines. Photo: SuSanA Secretariat / CC BY

Climate change could bring implications for regional security. Research by the Norwegian Institute of International Affairs has indicated that climate-induced migration from low lying areas in Bangladesh has triggered tensions in Myanmar and among other ASEAN member states. As people lose their livelihoods through floods and drought, Southeast Asia could see an influx of migration in the future.

Climate change could also threaten the ASEAN agriculture sector, which contributes 10.3% of the region's GDP. Research by the International Rice Institute highlights that rice yield will decrease by 10% for each 1º Celsius increase in temperature. Further, climate uncertainties can trigger disruption in agricultural employment—a major problem as more than a third of the population in Laos, Cambodia, Myanmar, Vietnam and Thailand depend on the industry for their livelihoods.

Climate change could also disrupt the tourism sector, which contributes 12% of the region's GDP, according to the World Travel and Tourism Council. It could threaten natural wonders situated in riverine and coastal areas such as the heritage cities of Luang Prabang, Laos and Penang, Malaysia, as well as Vietnam's Ha Long Bay, Myanmar's Inle Lake and Cambodia's Tonle Sap, as well as small islands across the region. More initiatives to cushion climate impacts would protect this rapidly growing sector.

What has ASEAN done to mitigate climate change impacts?

Many of ASEAN's initiatives on climate change focus on transboundary climate issues. The regional bloc established the ASEAN Agreement on Transboundary Haze Pollution, a binding commitment to coordinated haze prevention efforts, in 2002. Nevertheless, the transboundary pollution from forest fires in Indonesia has continued, affecting Malaysia and Singapore as well as other countries in the region. Mainland Southeast Asia has also been plagued by dangerous air pollution from burning during the dry season.

Concerns remain over the Indonesian government's capacity to monitor illegal slash-and-burn practices by palm oil firms linked to Singaporean and Malaysian corporations. Regional experts have voiced criticisms that the legally-binding 2002 agreement still fails to get stakeholders to respond, due to the lack of enforcement and ASEAN's non-interference principles.

The former vice president of Indonesia, Jusuf Kalla, said in his speech at the 2019 UN Climate Summit that "Land and forest fires that have broken out in parts of Sumatra and Kalimantan are worsened by the impact of climate change." As global temperatures keep rising, droughts will become longer and more intense, and forest fires may spread more quickly.

ASEAN has also adopted plans for an ASEAN Power Grid, which aims to encourage member states to pool resources and facilitate electricity trade regionally. Instead of building power generators in each locality that would compound carbon footprints and raise infrastructure maintenance costs, ASEAN Power Grid policy promotes a more sustainable and cost-effective energy supply with deeper regional integration. However, public awareness and support for the ASEAN Power Grid are still very low.

Recently, ASEAN also established the ASEAN Smart Cities Network as a catalyst for local governments across its cities to build bankable projects to address urban problems with technology. Many projects proposed by cities aim to alleviate climate change impacts, by improving public transportation, encouraging people to shift from fossil-fuelled automobiles and mitigating flood with smart engineering. With this initiative, ASEAN has started to explore collaboration beyond the domain of national government, encouraging active participation from local governments, business communities and nonprofit sectors.

What else can ASEAN do to address climate change?

As people across Southeast Asian are increasingly concerned about climate change, ASEAN could use the opportunity to take the lead and make significant impacts to promote deeper regional cooperation.

A publication by the Centre for International Law at the National University Singapore on Decoding the Paris Rulebook for Southeast Asia points out that all 10 ASEAN member states have submitted their Intended Nationally Determined Contributions (NDCs) to the UN Framework Convention on Climate Change. This means that all member states are fully committed to accelerating reductions to global emissions and climate adaptation. This means that ASEAN has an opportunity to find intersecting issues and interests between member states.

According to the Centre for International Law at the National University of Singapore, one critical step is to establish a robust institutional framework. As regional climate change issues become more complex and interlinked across critical economic sectors, ASEAN needs an institutional framework that can bridge projects and programs across different scales. ASEAN has already started many environmental protection initiatives and a new institutional framework can serve to coordinate the existing actions and to provide strategic direction as far as outcomes.

In addition, it will be vital for Southeast Asia to channel financial resources from the private sector in order to continue long-term engagement on climate. Malaysia and Thailand have provided financial incentives to the renewable energy industry. Since then, the clean energy industry has flourished and fuelled economic growth as well as employment. This momentum should be maintained and used to explore further opportunities.

In Indonesia’s new rice plan, experts see the blueprint of an epic past failure

How Can Indonesia Achieve Its Climate Change Mitigation Goal? An Analysis of Potential Emissions Reductions from Energy and Land-Use Policies