Jakarta floods and stories of residents: 'There is no early warning' amid the possibility of another flood A mother and child go through a flood in South Jakarta, Tuesday (25/02). BBC INDONESIA/MUHAMMAD IRHAM.

2020 was a tough year for the citizens of Jakarta, with at least three times flooding at several points in the capital.

Some residents complained they did not get an "early warning" to get ready to evacuate, while flooding might still happen again.

According to the Meteorology, Climatology and Geophysics Agency (BMKG), the rain will still fall until March.

The house of a Jakarta resident, Marsudi, who lives in Mampang Prapatan, South Jakarta, included as those inundated by floods due to heavy rains that continued to flush since Tuesday (25/02) morning.

In the past two months, Marsudi's house has been flooded three times with a height of up to one meter.

Masudi was cleaning the house from the remaining puddle when visited by BBC News Indonesia. He said only this year the floods have hit his home again since 2007.

Marsudi claimed there had never been a warning since the big flood on 1 January 2020. 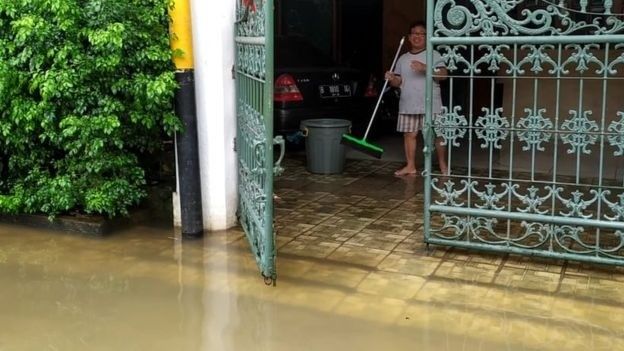 ​Though, with this early warning, he could make preparations, including transporting goods to the top floor of his house. "There was no notification. Absolutely none. There was nothing from RT / RW. The flood happened just like that. (The water) just got in," he said.

Another resident at the same location, Nur, 60, said the same thing.

She also said the early warning would help prepare or evacuate.

"There is no (warning) from the government," explained Nur.

According to Nur, the immediate assistance that residents hope for every time a flood occurs is that rubber boats are available, including cleaning tools and antifungal liquids.

"Yes, cleaning. Clean tools. Brush. Carbol. The rubber boat. If we want to go or go home from there, rubber boat should be provided. (The boat) should just stand by," said Nur.

In another location, Wagiyah, 51, said the urgent need for residents at the time of the flood was food, including medicine.

Meanwhile, Chairman of the Team from the Department of Water Resources in the Mampang Prapatan region, South Jakarta, Zappa Suharjat Gumilang, 32, claimed his team had been on standby since the night following the unremitting rain.

But he said the team from the service had given early warnings to all residents in this complex area.

"For that from RT to RW. The early warning. We have spread it via Whatsapp. Word of mouth too before," said Zappa.

Furthermore, Zappa said the teams deployed to locations in each district that were flooded consist of seven to nine people each team.

The team is conducting the evacuation, including checking the water pump and monitoring the flood gates.

"And those friends have circled in the puddle area and in Kemang Raya floodgates. In Pondok Jaya pump house, doing re-suction. Closing the gates" said Zappa. 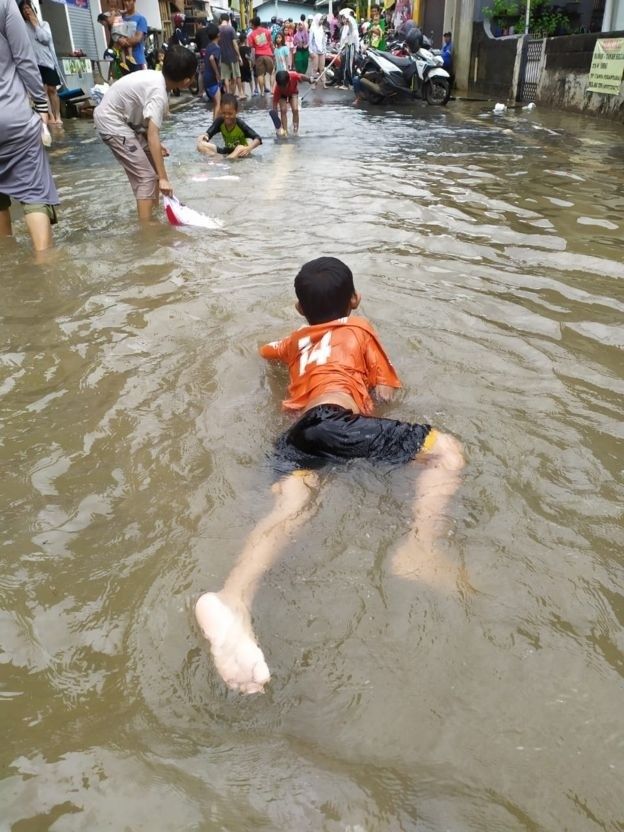 The children looked engrossed in swimming when the rain inundated Jakarta. BBC/MUHAMMAD IRHAM.

Anies: We concentrate on disaster management

Anies who no longer wanted to comment when asked again about the anticipatory steps of the DKI Jakarta Provincial Government in facing extreme weather in the future.

He said all the resources owned by the DKI Jakarta Provincial Government were mobilized to deal with the effects of the flood disaster.

The Meteorology, Climatology and Geophysics Agency (BMKG) estimates that heavy rains along with extreme weather will still hit Jakarta and other regions until next March.

According to BMKG, the extreme weather occurred because there was a pattern of low pressure in the southern region of the Earth, tropical storm Ferdinand in West Nusa Tenggara (NTB), and wind circulation in Banten which led to a meeting of air masses.

For this reason, according to hydrological and climate change researcher from the Indonesian Institute of Sciences, Heru Santoso, said the focus is now on dealing with disasters rather than tackling the causes of disasters.

"It means we are trying to save people first, such as providing shelter, public kitchens, boats, hospitals, and others," Heru said. 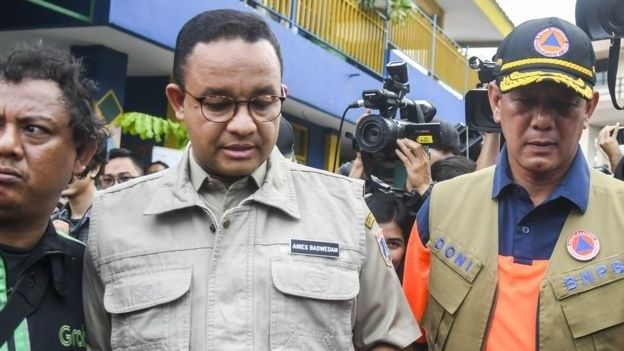 Then, said Heru, the DKI Jakarta Provincial Government must act quickly by optimizing river channels, so that water can immediately flow into the sea.

"Later, if things get better, clean up the canals, optimize the pumps, dredge the sediments of river sentiments in Jakarta which are very large in volume, there is a lot of garbage," he said. 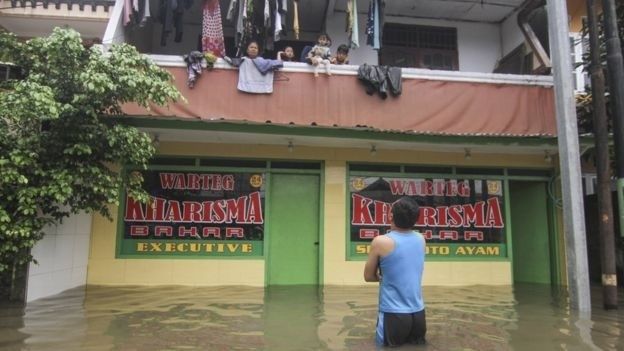 Many residents took refuge on the second floor of his house during a flood in the Kampung Makasar area, East Jakarta, Tuesday (25/02). ANTARA FOTO/ASPRILLA DWI ADHA.

By realizing the natural condition of Jakarta as a flood area, said Heru, it will be easier in making policies to deal with floods.

"Naturalizing Jakarta is not possible because the land conditions are already saturated so that water no longer seeps down and delta areas are flooded. So the handling is more about how the water flow quickly disappears and flows into the sea," he said.

Previously, Anies Baswedan was reluctant to continue the river normalization project in Jakarta and chose to run a river naturalization program following his campaign promises during the 2017 governor election. 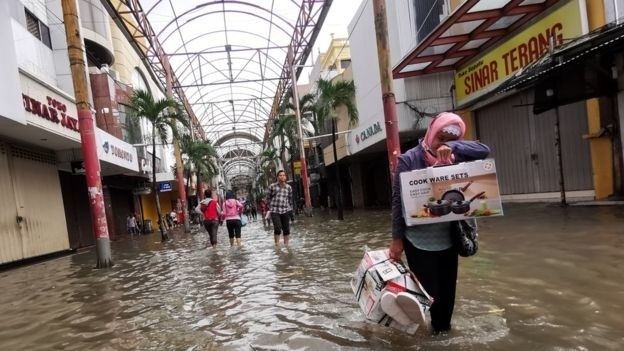 Anies then issued Governor Regulation Number 31 of 2019 concerning the Development and Revitalization of Water Resources Infrastructure (SDA) Integrated with the Concept of Naturalization.

In the regulation, the DKI Jakarta SDA Office was assigned to carry out a river naturalization program, namely by building green open spaces (RTH) and determining the boundaries of the river border.

However, the program was not proven effective because of the massive flooding that happened on 1 January 2020. 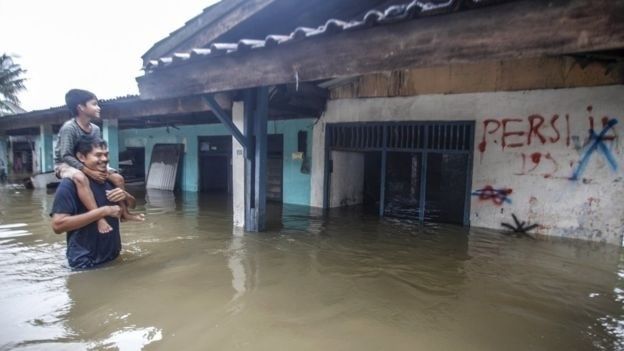 What is the result of the Jakarta flood? 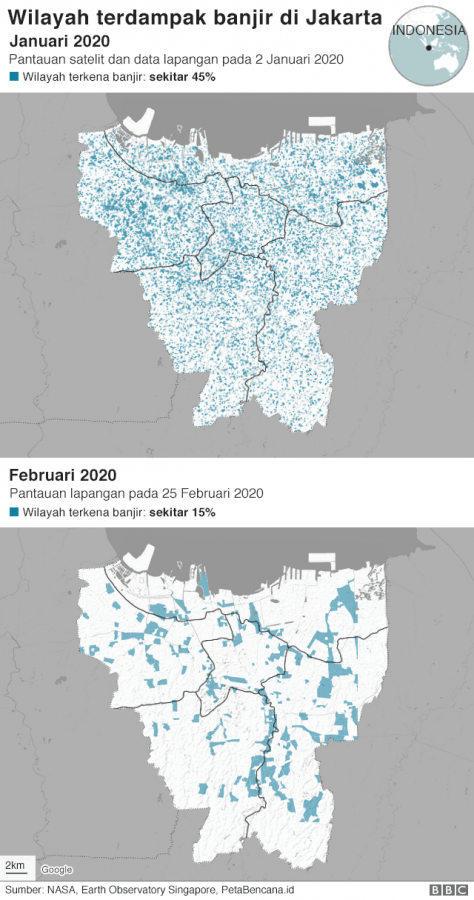 Map of floods in Jakarta in January and February 2020. BBC NEWS INDONESIA.

The floods that have occurred in Jakarta in recent days have had a direct impact on several public facilities. Some of the effects of flooding include

1. DKI Jakarta Education Agency said there were about 159 schools from kindergarten to high school that was closed.

3. Presidential Palace Complex inhabited by Joko Widodo was inundated in the morning.

4. Power outage in some areas in Jakarta that was caused by flooding because PLN did not operate around 326 electricity substations.

6. PT KAI Commuter Jabodetabek said that some of the train routes do not operate normally, such as the Cikarang route to Jakarta Kota will only reach Jatinegara Station and return from Jatinegara to Bekasi.

Jakarta Is Sinking So Fast, It Could End Up Underwater

Water for all in Jakarta

According to BMKG, This is What Causes Jakarta Flooding