Workers complete construction of a peer at the Patimban seaport in Subang, West Java. (tempo.co/Nanang Sutisna)

Patimban port in Subang West Java, a strategic project expected to ease logistics in the busy industrial neighborhood, has been scheduled for partial operation in September, according to the Transportation Ministry.

The ministry's sea transportation director general, R. Agus H. Purnomo, said the autoterminal would be the first part of the port to be operational, opening in September. The port is located about 70 kilometers from the Karawang industrial estate in West Java, where many Japanese companies have built factories.

The operation of the autoterminal is awaiting the completion of a connecting bridge that will be the main access that links the terminal with the backup area.

"The bridge will connect the autoterminal and the port in the middle of the sea. It will be 1 kilometer long and as the operation of the autoterminal is scheduled for September, the connecting bridge must be completed long before, hopefully in April or June," Agus told reporters in Jakarta on Thursday.

On Thursday, the ministry signed the third package of the contract for development of the port, which will be the base for the construction of the connecting bridge, with a contract value of Rp 524.1 billion (US$38.2 million). State-owned construction companies Wijaya Karya and PP will build the bridge.

Patimban seaport is one of the government's national strategic projects, funded by an official development assistance (ODA) loan from the Japanese government amounting Rp 14.2 trillion for the first development phase. 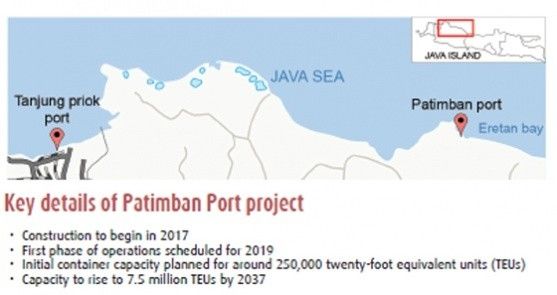 Phase I of the development includes construction of the terminal, the breakwater, seawall, revetment, backup area, road access and connecting bridge.

In the first development phase, Patimban port is planned to serve 3.75 million twenty-foot equivalent units (TEUs) and accommodate 600,000 complete built-up (CBU) vehicles. Meanwhile, in the second phase, Patimban's capacity will increase to 5.5 million TEUs and it is expected to reach its final capacity of 7.5 million TEUs in phase 3.

Patimban port is expected to be Indonesia's primary export port. It is also expected to solve the overcapacity of Tanjung Priok Port and traffic congestion in Jakarta from the transport of cargo.